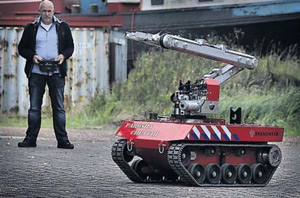 A robot for dangerous jobs

The first order is a fact for the robotic vehicle Parosha Cheatah GOSAFER. In May, the Parosha Innovators B.V. has a working prototype to be delivered to the Ministry of Internal Affairs.

A report of a Dutch soldier who was wounded during the dismantling of a roadside bomb was the inspiration for the Parosha Innovators B.V director Evert van der Ploeg in Leeuwarden for a small, radio-controlled tracked vehicle development. This platform is called to be equipped with a range of different modules: a reacher, a hydrant system, telescopic antenna, infrared or thermal cameras, sensors for carbon monoxide or heat measurement, the range of applications are legion. The platform crawler firefightingabilities been proven during demonstrations of the fire training center in Amsterdam.

Meanwhile the national police KLPD, Defence department, Public Works and Airport Schiphol are speaking terms with the further development of the Cheatah GOSAFER. Their importance is basically the same: dismiss people for the dangerous jobs and replace them with robotic vehicle. Each has its wishes for the modular design for various applications. Van der Ploeg has now developed a jib that successful compelted trials at Schiphol for deposit suspicious packages in a bomkar The technique was developed in-house, the production will in the factory at the Zwettestraat.

About the future of the ‘toy’ and production numbers is nothing to say. ” I do not feel that I make something bombastic, but apparently I have something in hands thatâ€™s needed,” said Van der Ploeg. He is convinced that unmanned vehicles gradually will take over dangerous work of fire-fighters, police and military. “Think about that fire at Chemie-Pack. Robots do not suffer from toxic smoke.” Suppliers for the materials such as: electric motor, control electronics and batteries Parosha Innovators B.V. search as much as possible in the region. “Likewise it can create even employment.” 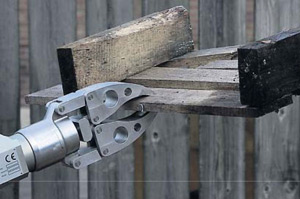 The Cheatah GOSAFER will become the new leg of the Parosha Group B.V., with a total of forty permanent employees. Most of them fall under the main operating company Zwette Machinebouw. They are currently working on a 27 ton Moonpool valve shipbuilder IHC Merwede. This hydraulic valve in the bottom of a vessel, a pipe layer, placed and serves as a breakwater. It is the second copy that leaves Zwette Machinebouw. In 2009, the first was delivered.

Parosha Innovators B.V. further includes the secondment branch for technical staff TSO Techniek, which focuses on maintaining production in the food industry. There is also Green Clipper, supplier of high quality mowers for sod farms, municipalities and sports clubs. Weakness in one subsidiary is offset by crowds in the other. Van der Ploeg notes the economic crisis, especially at the price pressure. Companies are even willing to work below cost, he says. ,, And so we must run faster to new orders.”